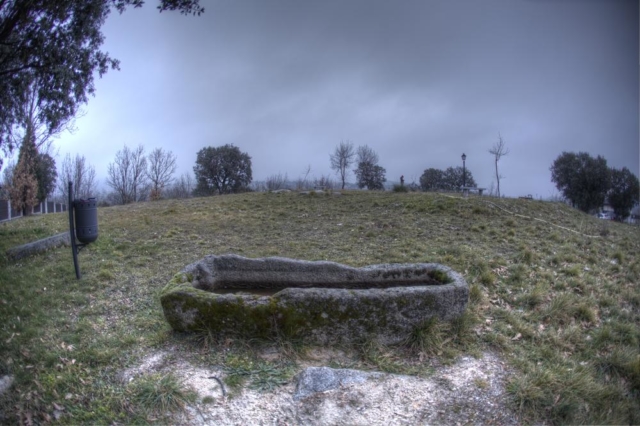 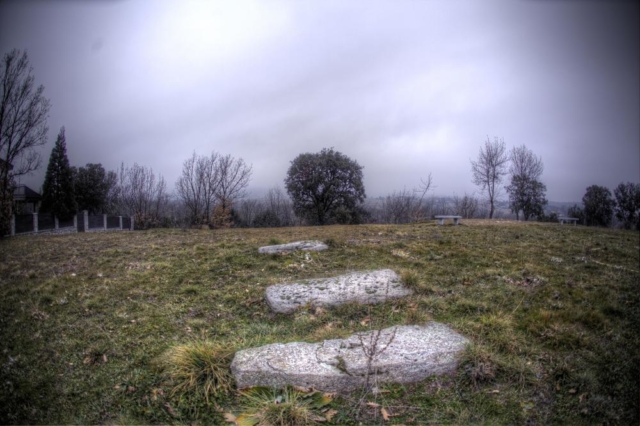 Back in 1960, a local from El Boalo, Mr. Victorio Rozalen, a businessman, and Mr. Felipe Sabaria, a Portuguese man, were carrying out pine repopulation tasks in a place known as El Rebollar, near the confluence of the Herrero stream and the Samburiel River. They discovered a vast necropolis and several tombs dispersed throughout the area. Covering the land, there were big gravestones that, when lifted, revealed the remains of bones, human skeletons, and some clay objects and copper coins.
It can be confirmed, according to the first data obtained, that there were tombs whose dimensions were 2.25 x 0.75 metres and 1.80 x 1.00 metres, and other smaller ones (1.70 x 0.60 metres), that may have been for infants. Each of them consisted of four stones, covered by a gravestone.

In 1999, some excavations were carried out in the area before the constructions of the area filled with chalets called EL Rebollar. It was stated that the necropolis was made up of approximately 100 tombs, many of which were just holes in the ground surrounded by grave markers that belonged to poor people, and others, anthropomorphic, dug in stone covered by big gravestones and belonging to wealthy families.

These tombs dated back to the 6th and 7th centuries and brought to light the existence of a Visogothic settlement in El Boalo, which supports the idea that there has been stable and continuous human settlement in the area since the Chalcolithic age. These settlements had just a few inhabitants who worked on agricultural and shepherding tasks and who survived by making use of the resources from the area around the confluence of the Herrero stream and the Samburiel River, as well as from the meadow, fields, and hills in the nearby area.

Therefore, it can be said that Visogothics lived in the mountainous town of El Boalo back in the 7th century, they built a town, a chapel, and they disappeared. As we said before, from their existence there were only a hundred or so tombs remaining in the outskirts of town, which is just a small testimony to what it was since a building complex was built in the area and most of the tombs were taken to the General Heritage Directorate. Nowadays, their exact location is unknown.

The former report presented by the archaeologists Manuel Castro and Lauro Olmo confirmed that there had been a hundred tombs in El Rebollar, all of which were oriented from West to East. According to experts, the Visogothics used to bury their deceased facing East because of the sunrise and sunset and it was a symbolic act. Some of the tombs, the richer ones, had a gravestone to cover them, while those of poor people were just a hole in the ground. In addition, depending on the social class, the deceased would be buried inside a wooden box or just covered by a shroud. For these reasons, it was not difficult to come across nails from those box inside the tombs of wealthier families.

The archaeologists only dug up a dozen tombs from the hundred found and they only found human remains in one of them. The abrupt temperature changes of the Sierra de Madrid and the abundant rain had made those bones disappear in most cases. No funerary trousseau was found either, but it must be taken into account the fact that since it was a well-known settlement, many tombs were plundered for decades by antiques seekers. Some locals assure that there were looters who pretended to be official archaeologists to open the necropolis. It can be said that 70% of the tombs were plundered.

From an historical point of view, the area containing the chapel remains along with the best preserved tombs are considered to be the most valuable part of the excavated area, according to the archaeologists. They remain as archaeological reserves for future diggings. The rest of the land was freed and the “El Rebollar” complex was built, as we can see nowadays.

Other anthropomorphic tombs have also been found dug into stone in other places in El Boalo. Some findings of the same type of tombs have been reported in El Vallejuelo Street and the “Cercas Viejas” field.