The Cuerda de los Porrones or Cuerda del Hilo goes down from La Maliciosa peak to Manzanares El Real. It is known by this name, meaning “String of the Jugs”, because of their prominent rocky peaks in the shape of milestones. When passing by El Boalo, 4 km away from Manzanares El Real, the hill offers a group of granite plates similar to those in La Pedriza. Some of them provide some beautiful climbing paths. This area would be called Ladera del Boalo on maps.

Since it is oriented to the south, it is perfect for those cold days. On the other hand, it becomes nothing short of an oven and is too hot to climb during the summer. It is important not to forget that since it is part of the Regional Park of the Cuenca Alta del Manzanares, we must follow all the applicable rules and any orders given by the forest rangers.

There are essentially two places with routes equipped for climbing: one of them is somewhere near, but below the halfway point, known as Peña de la Encina, or cancho de la Encina as locals call it. It contains a few traditional routes. The other one is on the right side, called Placas del Molinillo, next to the San Isidro Chapel. It also has very accessible climbing routes. We can mention a third place, the Sector Película, which has some very difficult climbing routes, though it is considered to be part of Peña de la Encina by many. 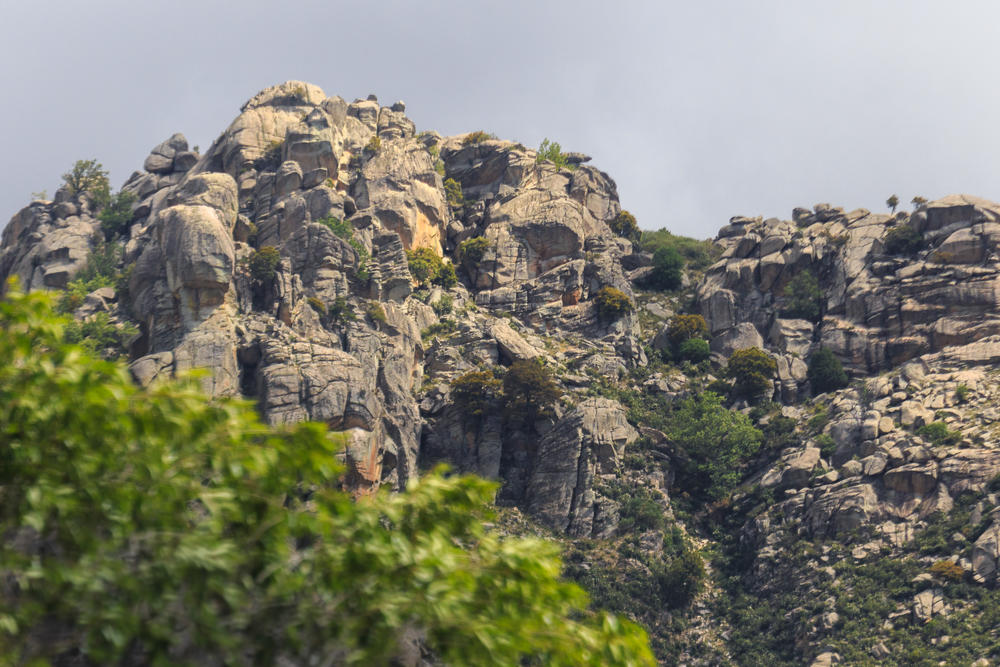 An eye-catching highlight, with sandy rocks, located below Peña de la Encina. It is quite vertical and intimidating on the right side, and softer to the left. Just to the right of the paths, there are six continuity routes, most of which are level 7. It was given its name because the routes refer to very well-known fiction movies (“The Fifth Element”, “Blade Runner”, or “Jurassic Park”).

Routes with 125 metres of height maximum, 1,437 metres of altitude

An overwhelming plate, it appears to have parallel side shoots when seen from a distance and is known as Peña de la Encina because of the huge holm oak located at its base. There are 8 routes on this wall, though the easiest and most frequently climbed one is the so-called “Arco iris” (rainbow), which is the most traditional of them all.

From the recreational area of the San Isidro Labrador Chapel, our town’s patron saint, a bright rocky tower known as Torreta de los Porrones can be seen. The climbing paths are below and to the left of this spire, whose roof stands out among the nearby rocks, with the exception of the white and vertical walls of Peña Blanca. Just off to the right of the chapel there is a marked sandy path that we can follow, avoiding the path shooting off to the left, and reaching a gate that is permanently open through which we can cross. Take the lane to the left until reaching a thicket area that is occasionally marked with a milestone on the way to two small prairies located a hundred metres below Placa del Molinillo, the smallest and most easily seen cliff that we will see in front of us. It would take about 20-30 minutes in total, going at a gentle pace.

A soft plate for climbers who do not like shock and distress from other more difficult cliffs. It has the quickest access of all El Boalo crags.

A dented plate located to the left of Placa del Molinillo, substantially steeper, and with two characteristic blocks at the top.

This information is not a climbing guide. You can find more detailed information about these routes in the book “Escaladas en la Comunidad de Madrid y alrededores” (in Spanish), by Tino Núñez, and in other publications.

On the way that goes up towards La Maliciosa from Mataelpino there are several green areas where climbing can be practised. The most well-known areas are some crags located to the left of the path that can be easily found by following the route marked by milestones. To the right, you can see the small Gargantilla stream dam, and following the path you will soon see the typical OW block where a few routes are found. About 6 metres to the left, there is a big plate with all kind of routes, with clean or semi-equipped chimneys that are quite well cared for and vertical. Behind them there is also a small plate that can be climbed.

If we go for a short walk around the area, you will be able to find more cliffs with more routes, though they are not the most visible ones. 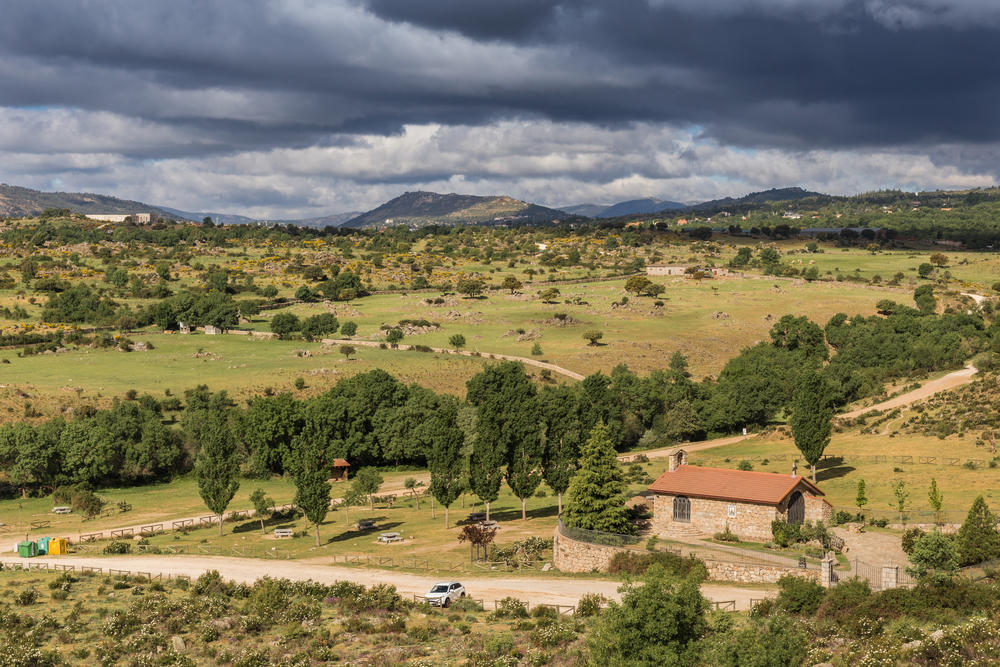 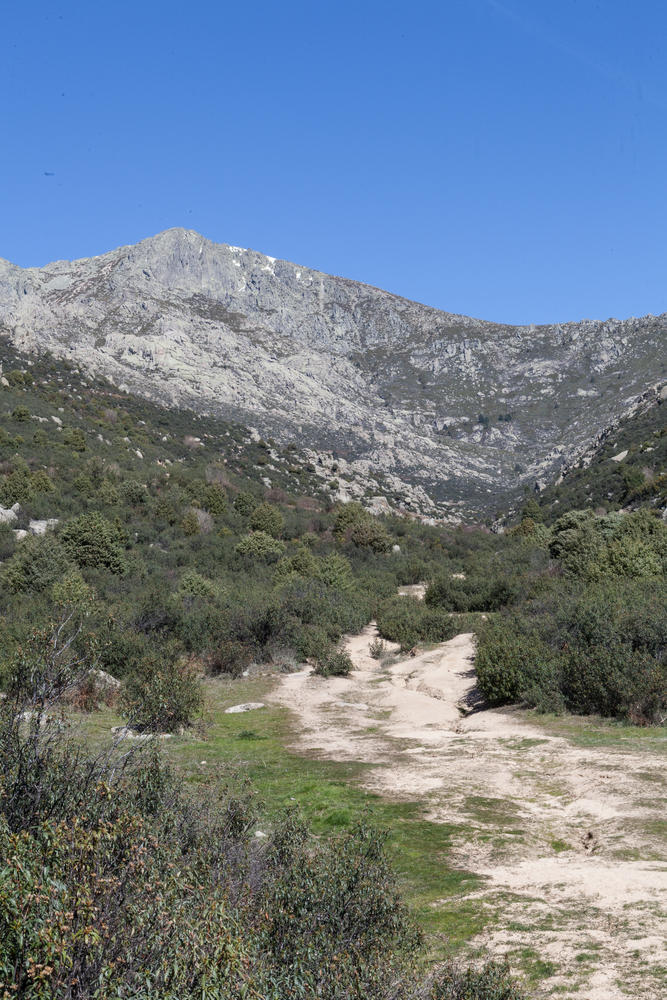 La Maliciosa is one of the least-visited traditional climbing areas in the Centre Area. The routes normally have several semi-equipped clean pitches and go along quite good quality granite rock.

We can say that the most alpine walls of the Sierra de Guadarrama can be found in La Maliciosa and El Peñotillo. These impressive walls offer a huge range of climbing opportunities both in summer and in winter. 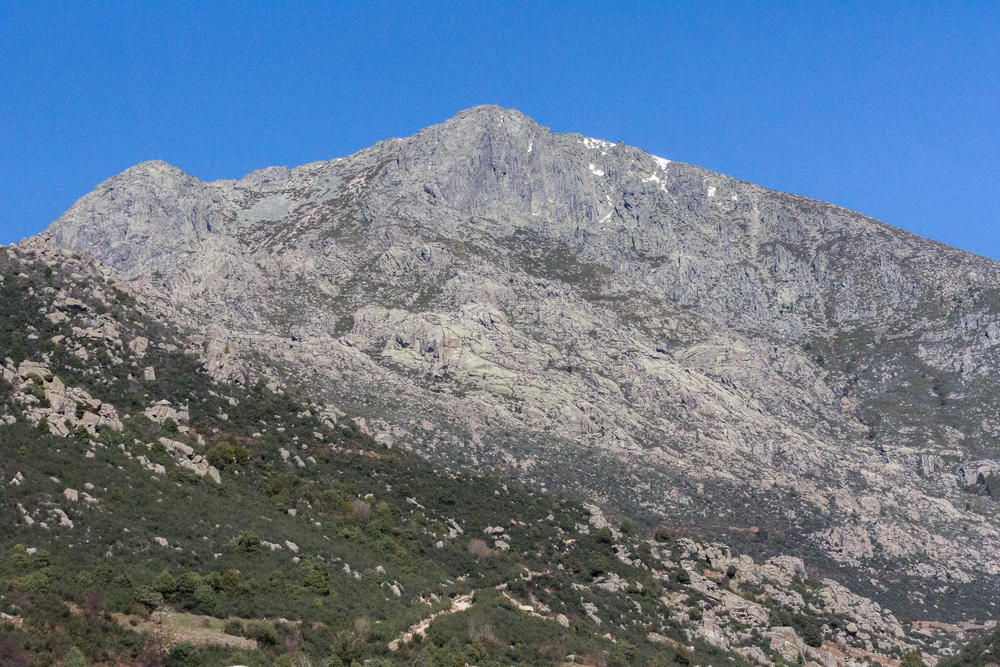 2. Espolón Rosa: This route is located after the Nico one, on the south wall of El Peñotillo and is about 125 metres in height. It is located next to a characteristic gendarme.

3. Velayos-Chocolate: It is located around the halfway point of the south wall and us about 150 metres in height. It is located between Diedro Mogoteras and Espolón Rosa.

4. Diedro Mogoteras: It is located about 20 metres to the right of the Galayos route, in a big and visible entrance, to the left of Velayos-Chocolate. It is also located on the south wall of El Peñotillo and is about 150 metres in height.

5. Galayos: It is located on the south wall of El Peñotillo and is about 135 metres in height. It is above a cave used to practise bivouac, more or less in the centre of the wall.

At the start of the route there are some plates on which the words “vía H-B” can be read, located under the chimney.

6. Hispano-Belga: This route is located to the left of El Peñotillo’s side shoot, next to the Galayos route.

At the start of the route there are some plates on which the words “vía H-B” can be read, located under the chimney.

7. Guti: This route is located to the left of the Maliciosa wall, going down the pit between Maliciosa Menor and El Peñotillo, some metres before reaching the Ezequiel route.

8. Ezequiel: This route is to the right of Guti, on the left side of Maliciosa Mayor and to the left of Dedo or Puro de Maliciosa (around 20 metres) and is about 180 metres in height.

9. Dedo or Puro de Maliciosa: They are very easy to find since they start right below Puro or Dedo de la Maliciosa and the meeting points are the same.

10. Los Diedros: This route is located in the deep canal between Espolón Promesas and Dedo or Puro de Maliciosa.

11. Espolón Promesas: It is located to the right of Puro or Dedo de Maliciosa and it goes through a noticeable side shoot. Climbing starts right at the base, in the centre of the side shoot.

12. Pared Desconocida: It is located to the right of Espolón Promesas. In order to get to the route’s starting point, go up a canal on the right side and stand on the blocks located on the left side, at the bottom of the wall.

13. Perico: The route is located on the southeast side, below a characteristic roof.

14. Del Chivo: The route is located on the east side of the main side shoot, which is located between the two canals in the centre of La Maliciosa’s characteristic walls. It has 150 metres in height and there is a fountain to the right that can help us orient ourselves.

16. Toñi: This route is located after the Nico one, on the south wall of El Peñotillo and is about 125 metres in height. It is located next to a characteristic gendarme.

17. H-P: This route is located 75 metres to the left of the fountain. There is a bivouac with rocks. To the left of the bivouac there is a grassy and rocky area that goes up to a grass prairie. From that point, we can see a big dihedral wall where the route begins.

18. Alta Ruta: From the fountain, we can go up through the canal to the right leading to the Canal de Todos, where the route begins about 50 metres away from the fountain.

This information is not a climbing guide. More detailed information about these routes can be found on some climbing websites and blogs, such as “Coorporación Maldito Duende” (in Spanish).